A/N: This was my first attempt at fan fiction. I went in without a beta and, even though it's post-Requiem, I wrote it before I saw the episode (based only on a spoiler from the morning it aired). I was somewhat daring (or silly...your choice).

Disclaimer: All characters herein are property
of the witty, inventive, endlessly frustrating
minds of CC and Co. Besides, you don't want to
bother with my teeny tiny story.

Spoilers: Requiem, and I suppose, the Pilot--if
we're being picky.

Archiving: Sure…just as long as it's not in a
Hall of Shame for fanfic or something.

Notes: This has not been beta read, so all
mistakes herein are mine and mine alone!
[page]


Before I even open my eyes, a cool breeze
quietly, but persistently, tempers the warmth
surrounding me. While part of the pre-
conscious me wonders what could be the cause of
this mixed sensation, the "me" part of me…just
lays back and enjoys it. One of the strange
contradictions that IS my life.

My eyes flutter briefly and see the raised
window. I smile as I remember Mulder's speech
on the benefits of fresh air. Ironic,
considering fresh air is the last thing I would
associate with the vision of his apartment.
But, while he is in my bed, the windows need to
be thrown open. I smile even more as I
acknowledge that he is also the source of my
warmth. It is still all so new. His breath
caresses my cheek… his head burrowing into the
crook of my neck…one arm, one leg…draped over
my body. He is a man of sensation…even in
sleep, he seems to be breathing in my very
essence. For the first time in my life, I want
to give of myself totally…because any part of
me that becomes part of him means that an equal
part of him will be mine in exchange. And,
yet…both of us are allowed to keep the
"original." A strange paradox. Nothing is taken
away…so much is given.

"Hey, yourself," I say, turning in his arms. He
leans forward and plants a slow, lazy kiss on
my lips…a dreamlike mixture of chocolate
melting in the noonday sun and balloons being
released high in the air… all at once. I lean
back and look at him.

"You've found your smile," he says, with a
small look of surprise on his face.

"I've been smiling at you for quite some time,
Mulder." I reply, running my forefinger across
his lower lip.

" I've known there was something different
these past few weeks, but I haven't been able
to pinpoint exactly what it is…. until now. Who
would think it would be something as simple as
a smile."

"I guess…" He snuggled his head against my neck
again, just breathing me in.

"I didn't know it was lost," I murmur to him.
Had I been that dour all this time?

"Well…maybe just misplaced…but, it's nice to
see it back full time."

I push myself up against him. I want more of
his essence…and I want my smile to seep into
him, and become part of him…full-time.

There are a thousand ways to describe all the
physical reactions that take place in the human
body and comprise the state commonly referred
to as "love," or being "in love." But, at its
heart…is something mystical…something
unexplained. When I was 12, and under the spell
of too many romance novels and too much of my
sister's "boy talk"…giving in to the urge to
try and conjure up the "man of my dreams"…Fox
Mulder was not the vision before me. Not at
all. "Mystery man" was not a man of mystery at
all…he was practical… sturdy…. a breadwinner
and a supporter of my ambitions--all at the
same time. He was a good father to our 4
children. He would sit in the living room on
Saturdays, with a selected group of highly
intellectual friends and no doubt scoff at the
eccentrics who believed in UFO's and anything
not grounded in bona fide scientific
explanation. And, I would sit beside him (not
the least bit disheveled after taking care of
the four children, the golden retriever, and
the 12 room suburban home), laughing and
agreeing with my husband, waiting for the
appropriate moment to make a witty comment of
my own.

It seemed like an ideal life-- until I walked
into the basement office and made an instant
connection with the smartass who lived there.
The dreamer and the realist. He--always
reaching for the sky. I-- grabbing hold of his
pant leg and bringing him back down to earth.
One accepting almost everything on faith…the
other needing explanations and solid proof.
And, yet…it has worked. And, it has been
incredible.

It has been a miracle…all of it. Our
meeting…our connecting…our staying alive in
impossible situations…and mostly, our love.
That is the one thing I do not question. I have
enough proof, and frankly, explanation is
beyond this realm. It is a matter of very
simple, highly complicated…faith.

As I lay sleeping in the hospital bed this
morning…I knew…I knew the minute he was taken
from me.

A bright, bright light pierced the darkness of
my closed eyelids…and almost immediately faded
away…to the vision of our basement office and a
familiar sight. Mulder's poster…."I want to
believe." I do believe, I realized….I believe
in it all. I can no longer not believe. I
believe in him. I believe in us.

He will be fine. I will find him. I will move
heaven and earth. …one more time. I have to. He
is, quite simply, my life.

I sit back and try and think of the human
reaction to shock. But, my mind puts it all
aside. Maybe I will feel differently tomorrow.
Between the desperation that is sure to
come…the confusion….the depression…maybe I will
put myself through a battery of tests to find
explanations for the unexplainable. But,
today…there is just a warmth. The cold breeze
of reality hasn't hit me. Just before going to
sleep, I was given news of another miracle…one
that sustains me. One that I have yet to
question. This is just another in our chain of
miracles.

I smile at the vision of him holding his child
in his arms…the future…the person who will help
make every ounce of pain he ever felt
disappear. The person who will never know the
terror of losing everything in life…of
constantly struggling to find answers to
questions that are almost impossible to answer.
Mulder…and I…will make sure of that.

Will he laugh at the news…cry? Have that
strange, puppy dog expression on his face? I
close my eyes. You will make a wonderful
father, Mulder. I can't wait to tell you. Or do
you, somehow, already know? It wouldn't
surprise me.

I smile again…maybe tomorrow will be time for
the tears…but, for this moment, I can't think
of it. I am too full.

I'm carrying the warmth of our personal
miracle….the merging of two souls into one new
body.

I know…in my heart, and in the "me" part of
me, that there is another miracle…waiting for
us….out there. 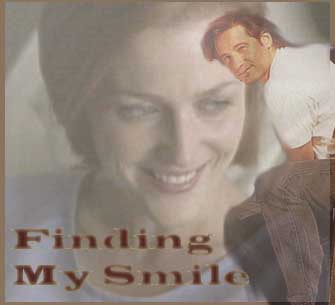